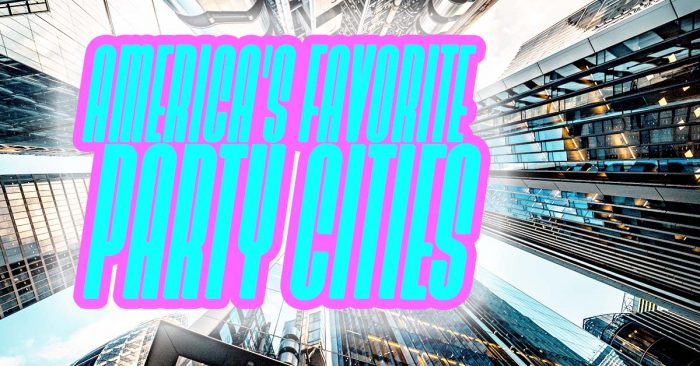 Just about every major city in America could be considered a “party city”. There always seems to be something going on in New York, L.A., San Francisco, Atlanta, Chicago and Boston. These are towns with major league sports teams, large arenas and concert venues and vibrant urban areas. But there are other smaller, in some cases much smaller, cities and towns that are known for their party atmosphere. In fact, just saying some of their names will conjure up images of partying in the streets. Here are some of America’s Favorite Party Cities

While most people think of New Orleans for its Mardi Gras celebrations each year, the city has parades and music festivals almost every week and the French Quarter is bustling almost every night. The city is home to the Super Dome, bringing a steady stream of fresh partiers with every major sporting event and convention it holds. New Orleans is also the birthplace of Jazz, is known for its Creole and Cajun cooking, and the city’s Jackson Square is a year round festival of music, entertainment, arts and crafts.

The legalization of casino gambling throughout much of the country have taken a little luster from this party destination, people still travel from around the world to visit this playground for adults. This is a city where you are likely to see just about anything including zip-lining over Fremont Street, hi-rise roller coasters and thrill rides, alcoholic beverages as big as your head and, of course, lots and lots of non-stop gambling.

This city has an event filled calendar, many of which are centered around Motorsports and vehicles. The city is home to NASCAR and the Daytona International Speedway, which hosts multiple motorcycle and car racing events annually. It also brings in tens of thousands of bikers each Spring with Bike Week and every fall with its Biketoberfest events each of which is scheduled for a week but last much longer. Daytona Beach also is host to a myriad of competitions ranging from Cheerleading National Championships to jet-ski races. The wide, drivable beach also attracts thousands of spring-breakers every year.

This city at the tip of the Florida Keys has almost two party personalities. The first is the daytime, laid-back beach town party lifestyle. The other starts at sunset with street performers setting the scene for a party atmosphere that will last until the wee hours of the morning. The town is loaded with famous watering holes like Sloppy Joes, The Rum Bar and more, featuring a variety of live bands all of which seem to play Jimmy Buffett. The town really steps it up for Halloween and New Year’s Eve.

These are all cities that should be on everyone’s bucket list. Even if you aren’t a big fan of partying, the people watching alone is worth experiencing.